Add My Business Add My Event

Review for Franks Place Ormond By The Sea by Nicholas
Rating: 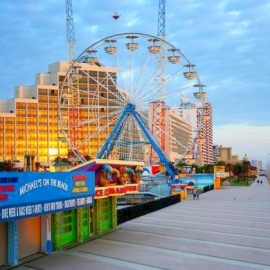 Hotels & Things to Do in Daytona Beach

Museum of Arts and Sciences

The Oasis Tiki Bar and Grill

Once Upon A Child- Daytona Beach

Named "The World's Most Famous Beach" since the 1920's, Daytona Beach, Florida, located on the Atlantic Ocean, is one of very few places where you can drive a car (a 4 wheel drive not needed) on designated areas of an ocean beach.

Attracting over 8,000,000 visitors every year, and several thousand bikers during Bike Week and Biketoberfest, Daytona Beach still manages to provide high security with cameras filming the beach and hotel areas.

The Timucuan Indians lived in that area originally. The United States acquired Florida from Spain in 1821 although permanent settlement did not occur until after the Second Seminole War which was fought from 1835 to 1842.

The City of Daytona Beach, founded in 1870, was named for its founder, Matthias D. Day, who built the first hotel, the Palmetto House, in 1874. Automobile and motorcycle races began in 1902, and the first stock car race was held in 1936. The famous Daytona International Speedway replaced the beach course in 1959 when NASCAR was created and is the scene of the Daytona 500 and Coke Zero 400 (also called the Pepsi 400 or Firecracker 400).

Located only 10 miles south, the Ponce de Leon Lighthouse is Florida's tallest lighthouse completed in 1887 and becoming a National Historic Landmark in 1998.

The Museum of Arts and Sciences is actually a collection of galleries and museums and has one of the world's largest Coca-Cola collections.

The Daytona Cubs (a minor league baseball team) and the Daytona Beach ThunderBirds (an arena football team) call this home.

Where To Eat in Daytona For Father's Day

If you're looking for places for where to eat in Daytona for Father's Day, this guide has got your back! From dazzling steakhouses to local sushi spots, these Father's Day

Best Places To Eat For Mother's Day in Daytona

Treating mom this year can go a long way and why not treat her to one of the best places to eat for Mother's Day in Daytona. These Mother's Day

Where To Get Easter Dinner To-Go in Daytona Beach

Easter is this Sunday and you may not feel like cooking. These top restaurants in Daytona Beach are offering Easter dinner to-go for your convenience duri

Eaten all of your snacks and it's only Day 7 of the coronavirus quarantine?! Maybe it's time for a proper meal at one of your favorite local spots. Luckily for you, many

What day of quarantine are we now on? I have lost track. I'm sure your fridge and pantry are slowly becoming less and less intriguing with fun options. Or, you're simply getting tired of cooking (I know...

If you're in a tight spot and need a bite to eat while on the go, these carryout and delivery restaurants in Daytona offer delicious food in no time. From local pizzerias to unique...

Things To Do in Daytona Beach This Weekend | February 20th - 23rd

From National Margarita Day to local chili cookoffs, events in Daytona Beach are packed with fun for everyone this weekend. If you need ideas for

Weekends in 2020 are speeding by and Valentine's Day in Daytona Beach, as well the Daytona 500, are going to make this one go by ever faster. With so much going on

Things To Do in Daytona Beach This Weekend | February 6th - 9th

Get ready for a fun-filled weekend because there are so many things to do in Daytona Beach it will be hard to choose just which events you should head to! You can spend the week

If you've been busy working hard all week to make it to the weekend, then why not celebrate by enjoying some of the exciting events in Daytona Beach this weekend has to offer! The b

Things To Do in Daytona Beach This Weekend | January 23rd - 26th

This week's list of things to do in Daytona Beach has something that everyone will enjoy! From live music to art festivals to NASCAR races and more, make sure to grab your frien

Things To Do in Daytona Beach This Weekend | January 16th - 19th

If you need a little motivation to help you get through this work week then don't you worry! Our weekly guide of things to do in Daytona Beach this weekend is full of exciting e

Concerts Coming To Daytona Beach During January, February and March

Although Daytona Beach might be known for its fun beaches and coastline activities, they also have a great touring space for many incoming performers to use! Moreover, one of the best ways to ki

Daytona Beach is a lively Florida community in Volusia County, and there are more than 68,000 individuals who reside in this sun-kissed city. It's also a little less than an ho

Romantic Things To Do In Daytona Beach

With the holidays over, there's only a small break until Valentine's Day comes running around the corner. For a city as busy and populated as Daytona Beach, reservations for dinner spots will fi

Things To Do in Daytona Beach This Weekend | December 26th - 29th

Even though Christmas is over, that doesn't mean the fun has to end! After spending all week hanging at home with your loved ones, it's time to head out and enjoy some events in Daytona

Things To Do in Daytona Beach This Weekend | December 19th - 22nd

Next week is Christmas Day in Daytona Beach and if you haven't already started celebrating the holiday season, then it's time to start! There are

Things To Do in Daytona Beach This Weekend | December 12th - 15th

The holiday events in Daytona Beach continue this weekend as we get ready for another exciting weekend of fun in the city! There will be holiday parades, Christmas movie viewings

Light Up Your Season With These Christmas Lights In Daytona!

Daytona and Christmas lights go together like Santa and Mrs.Clause, Rudolph and Slays, Christmas list and my parents telling me I'm too old for presents. Essentially it's tied together and part of its...

Celebrate The New Year In Style At These Upscale Restaurants In Daytona!

With a new comes new and better things. A great way to stick with this idea and push forward into 2020 the right way is to treat yourself to a nice dinner to start the year. Lucky for you, you're in

Things To Do in Daytona Beach This Weekend | December 5th - 8th

Christmas in Daytona Beach is officially here and there are so many holiday events for you to choose from! The city is bustling w

Valentine's Day in Daytona Beach can be a challenging time if you're single especially with all of the balloons and sappy Instagram posts everywhere. If you're single, don't

14 Romantic Things To Do On Valentine's Day In Daytona Beach

Whether your Valentine's Day will be filled with the you and your closest friends or your loved one, one thing's for sure, romance will be in the air! If you're looking to dine out at a romantic restaurant,...

It's that time of the year to be somewhat irresponsible with your money, but still, feel good about yourself because of all the savings. Shopping in Daytona is always a good time. Wit

There are so many things to be thankful for this year, especially all of the holiday events in Daytona Beach that are happening this weekend. There is no better way to celebra

Harlie  1 month ago
hey whats up?
Like Reply
Timmy  1 year ago
Hey
Like Reply
David  1 year ago
Come experience the only Segway tour on Daytona Beach. Daytona Segway Tours 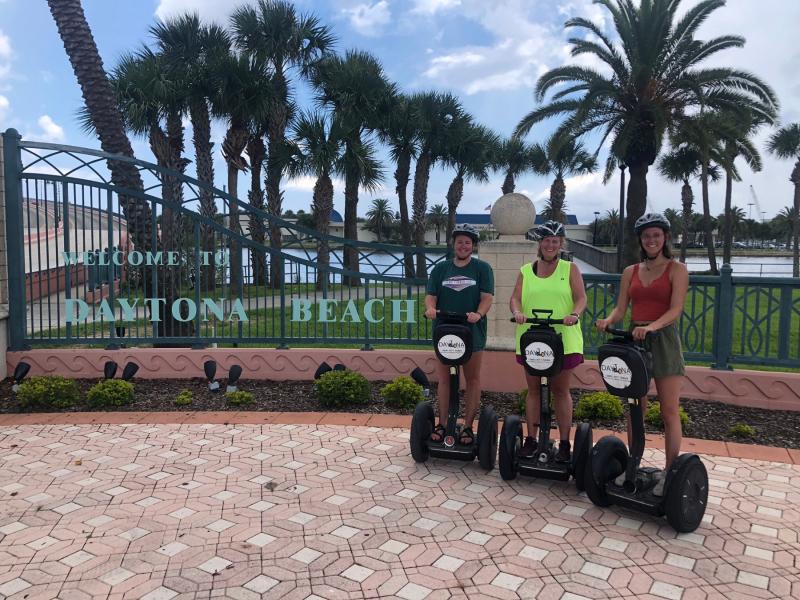 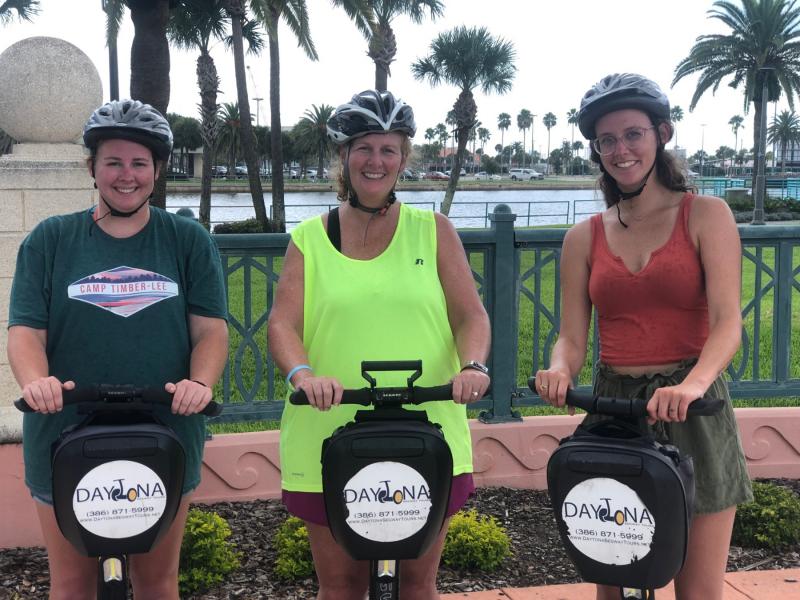 HAPPY FATHER'S DAY! Give the grill masters a break!

Bring your dad's & come hang out w/ us at Main Street Station on Father's Day. We'll drink & jam out to them!

Father's Day at The Jack!

Treat Dad to a day of fun and games at one of America's most historic ballparks. 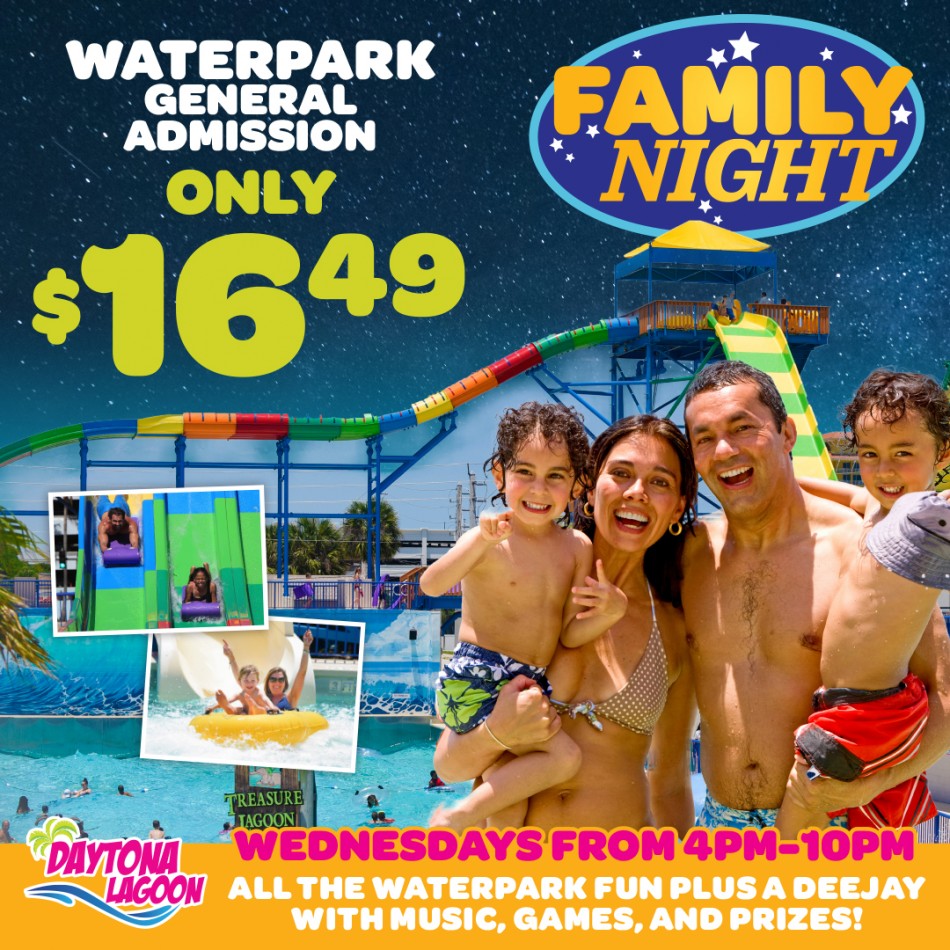 On Wednesdays beginning June 9th from 4-10pm, Waterpark General Admission is only $16.49. Get all the waterpark fun plus a DJ with music, games, and prizes! It’s the perfect way to have some family fun in the middle of the week!

Sign up for our newsletter o https://CityEquipmentFL.com/ and take 15% off your first equipment rental. Good on Day - Week - Month, even a Year rental! Tremendous savings.